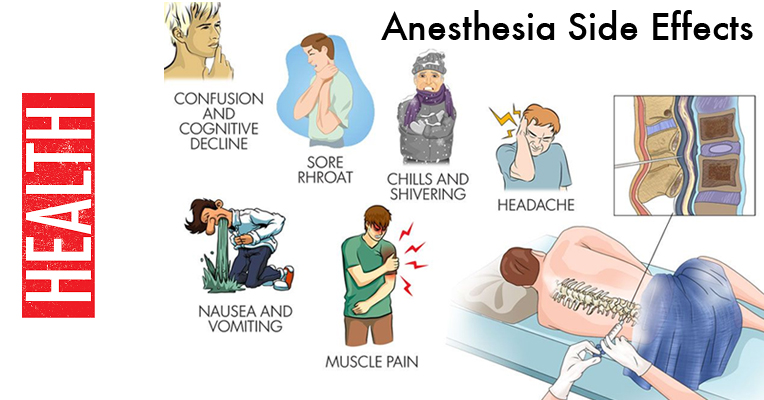 Anesthesia has been used in surgery for more than a century. But while decades of innovation have made it reliably efficient, they have yet to smooth out a few quirks, not least being the numerous side effects. Not everyone will experience adverse symptoms after being put under, but the possibility cannot be brushed aside.

Luckily, most anesthesia side effects are minor. General weakness, headache, and body ache are normal, as the body is still getting used to having sensation back. If a tube was used to administer the drug or to aid in breathing, the patient may have a dry throat upon waking up, which may develop into strep throat later on. The anesthetized area can feel itchy and irritated; doctors usually advise against scratching or tapping and instead prescribe a soothing cream. Major surgeries are commonly followed by jaundice, a condition marked by yellowing of the skin and eyes.

Different age groups can also experience different side effects. In children, shivering and chills are among the most common symptoms. These cannot be prevented, but they can be alleviated by wrapping a thick blanket around the child for a few minutes. In adults, side effects include nausea and vomiting, as well as a range of digestive problems. Many patients report bloody stools and urine the first few days following the operation. Older patients often wake up confused and lose some short-term memory, although this usually passes and is no cause for concern.

Other symptoms are more drastic. For example, a patient’s blood pressure can drop drastically and cause fainting, especially when they first stand up. Rarely, a patient can have an adverse reaction to the anesthesia and require a longer stay at the hospital. This usually happens when a person has an existing condition that wasn’t taken into account. Doctors can also administer too little or too much anesthesia, although such cases are far from the norm.

While many of these side effects can be avoided, most of them actually result from the drug affecting an existing condition. This is why anesthesiologists take a full medical history of the patient, from previous illnesses and surgeries to any known allergies. The latter is especially important because some allergic reactions to anesthesia can be serious. There are different types of anesthesia, and some are made specifically to skirt certain conditions or reactions. The more a doctor knows about his patient, the better the choice he can make.