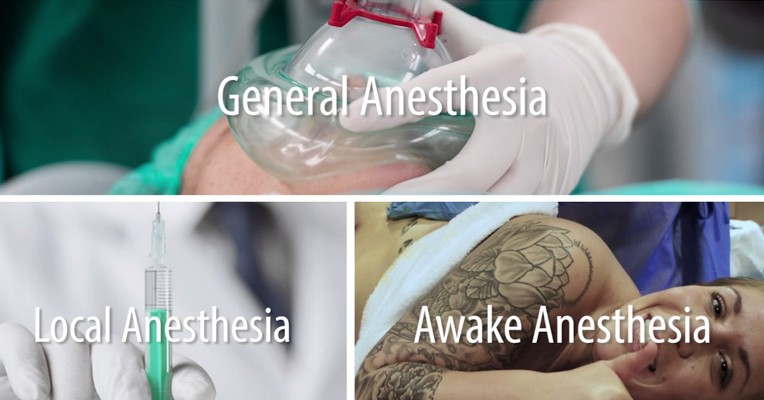 Anesthesia works by blocking off the nervous system in some way so that a person feels numb or stays unconscious during surgery. An additional purpose can also be to help the patient relax before the surgery and block memories of it afterwards. There are three main types of anesthesia, according to scope: local, general, and regional.

Local anesthesia, as the name suggests, affects only a specific part of the body, such as a patch of skin or a limb. The person stays awake during the surgery, but they may be given strong sedatives to help limit movement. This type lasts only up to a few hours and is used in out-patient surgery, meaning the patient can come in and leave on the same day. The effect usually lasts for a while after the surgery, helping to relieve post-operational discomfort. Dental surgery and stitching wounds are the most common examples.

Regional anesthesia works on a large area, but not the whole body. An example is the epidural given to women in labor. The drug is injected into a cluster of nerves that control a given region, such as the lower half of the body. Sometimes doctors just inject large doses of local anesthesia, although this is risky and should be done only under very controlled conditions. The patient usually remains awake after receiving regional anesthesia, which reduces the risk of side effects.

General anesthesia numbs the whole body and keeps the person unconscious during the operation. This can be done by inserting an IV into a vein, usually in the arm, providing a continuous flow of the drug; or by having the patient breathe in special gases (commonly desflurane, isoflurane, sevoflurane, and nitrous oxide). Patients often experience side effects upon waking up, such as nausea, vomiting, dizziness, and confusion. Because large doses of the medicine are given, doctors take a complete medical history of the patient to make sure there will be no adverse reactions.

A fourth type, called dissociative anesthesia, is sometimes recognized. It involves the use of dissociatives, drugs that cut the transmission of impulses from one part of the brain to another. The patient is not unconscious, but rather falls into a trance-like state where they feel “separated” from their body. It is commonly used in emergency situations where there is no time for the usual preparations (such as fasting), or in short, painful procedures such as changing dressings on large wounds.